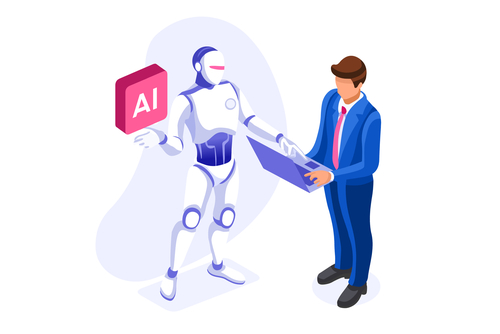 AI has been rapidly evolving in recent years with the IT industry placing demand on this innovative technology solution. It began life with humble origins compared to the immense potential that modern AI software can offer for business networks. This blog will be looking at what AI is, how it originated and developed, and how your business can take advantage of this tool.

It’s important that we know what AI actually is. Indeed, many businesses don’t entirely understand how AI can be beneficial for their tech problems and solutions.

Let’s define what AI is and what it isn’t. When someone mentions the term “Artificial Intelligence,” you probably think of  automatic computers or machines, like robots. This belief was widely popularized by Alan Turing’s statement claiming that “one will be able to speak of machines thinking without expecting to be contradicted.” However, artificial intelligence IT solutions are actually a bit more complicated than this; the modern realm of AI certainly isn’t capable of self-awareness just yet, but it is still capable of offering a huge amount of potential for businesses.

So, AI isn’t just an android; rather, it’s a program that is capable of completing tasks to a similar standard as a human or better.  AI systems can be categorized as: Narrow, General, or Super-Intelligent.  Narrow and general AI systems are already available for business networks to implement as an IT solution. These systems serve to do a small number of specialized tasks. Super intelligent AI is still in development though, and will likely not exist for a long period of time.

AI hasn’t always been at its current standard. In fact, it’s taken a long time for AI to evolve to it’s current stage! Of course, the earliest origins of artificial intelligence could be Alan Turing’s original Turning Machine – the first ever variant of a computer, although certainly nothing like the modern computers we rely on for business nowadays.

Many don’t know that AI has actually had a notable prominence in our society and culture for easily a century. The first machine capable of automatically playing chess without human intervention was Leonardo Torres y Quevedo’s creation in 1914. Following this creation, in 1929, Japan’s Makoto Nishimura developed  the first-ever “robot”.  The model was able to use air mechanisms to move its hand and head and control its expression! It wasn’t until 1955, that “artificial intelligence” became a term.

Despite a somewhat early start to life, tales surrounding artificial intelligence were commonplace. They spoke of IT solutions that would serve to better the world and provide an alternative to normal tech solutions, of science fiction stories and seemingly unbelievable feats of business computer systems. The first artificial intelligence programs in the 1990s, Jabberwack and Cleverbot chatbots designed to “simulate natural human chat in an interesting, entertaining, and humorous manner.”

A new line of AI also came around the turn of the century. The Furby toy was created and went on to be the first “pet” robot for children, and in 1999, Sony released AIBO, a robotic dog that could recognize over one hundred voice commands and even communicate directly with its owner. This would prove a big step forward in terms of the development of artificial intelligence software and programs.

Modern artificial intelligence has developed rapidly. As a business owner, you must know how these IT solutions could be applicable for your organization. Some AI programs used in businesses include voice commands and applications like Apple’s Siri and Amazon’s Alexa. These programs respond to user inquiries with natural language.

So, how can modern businesses use AI programs for the best business network boost? Well, artificial intelligence can be applicable in many different ways for your business, from helping to reduce the incidence rate of human error (which is invariable with any business) through to automating production processes and supply chains based on demand and availability. Artificial intelligence can also have a big impact on your business’ hiring practices, helping your business to streamline the recruitment process and lower the costs of hiring new talent for your firm!

Learn More About AI for Businesses

For more information on how AI could benefit your business networks, contact us. Our team provides quality IT services so that you can get back to doing what you do best – managing your business. Don’t compromise – let us help you find the perfect AI and IT solutions today!